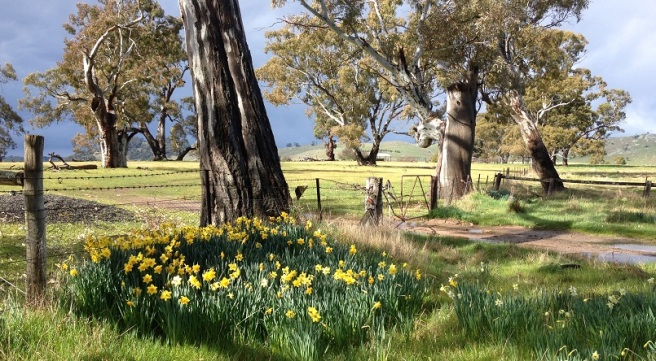 At a bend in a quiet country road a little to the north west of Melbourne, there is a lane that leads to an old homestead — a low timber building with wide verandahs and stone chimneys, and probably more than a hundred years old. Along that lane, some sixty or more years ago, a consummate gardener planted hundreds of bulbs of her favourite flower, the daffodil.

Today, all along the length of the lane, under its wonderfully gnarled old red gums, is ‘a crowd, a host of dancing daffodils … beneath the trees, ten thousand dancing in the breeze’. (I quote the poet William Wordsworth here because I can think of no better way to describe this glorious sight of thousands of daffodils.)

The gardener was Mrs Murray, a lively and charming old lady already eighty or so when I interviewed her in the 1970s and wrote about her garden in the weekly gardening column I contributed to the Women’s pages of the Sun News Pictorial in those days.

I visited her occasionally after that and at each visit I saw that the daffodils had spread further along the length of the lane, turning it into a magical place each Spring. I was there again a few weeks ago and saw the last of this Spring’s flowers, still lovely, still in great sweeps of gold, bright yellow, and lemon and creamy white. The only consolation in having to tear myself away from such a beautiful place was to know that it would be just as beautiful again next year, and the next, and the next, and that it would be there for my grandchildren to see for as long as they too cared to visit.

Mrs Murray’s garden was lovely too, and she tended it with a passionate love of its plants. But daffodils were her great love and when there was no more room in the garden for her favourite flower, she planted yet more bulbs in the paddocks beyond the garden so that sheep and cattle and passing kangaroos grazed in a bucolic scene in Wordsworth’s ‘laughing company’ of nodding, fragrant golden flowers. When the paddocks were planted, she turned her attention to the lane and planted her beloved flowers there too.

The garden has not been tended for decades now and there is little trace of it left, and the paddocks now are just grass and native trees, all that has survived the ravages of frequent years of drought and fire and hungry stock. But the lane, in Spring, is more beautiful than ever and Mrs Murray’s golden legacy lives on.

The local town of Kyneton honours Mrs Murray’s memory with its annual Daffodil Festival, and if you are there in the early weeks of Spring, and make your way to Mrs Murray’s lane, I promise you, your heart, like Wordsworth’s, will ‘fill with pleasure and dance with daffodils’. 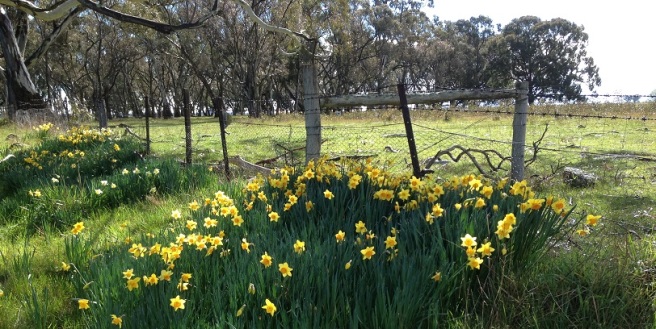 I have copied Wordsworth’s Daffodils if you have forgotten it or would like to read it for the first time. I found this version in my treasured copy of  Lyrical Forms in English, the text we used throughout high school under the strict guidance of our very English English teacher. She was a Cambridge graduate and poetry her great love, a passion that she managed to pass on to her students and one that I, for one, am grateful for. 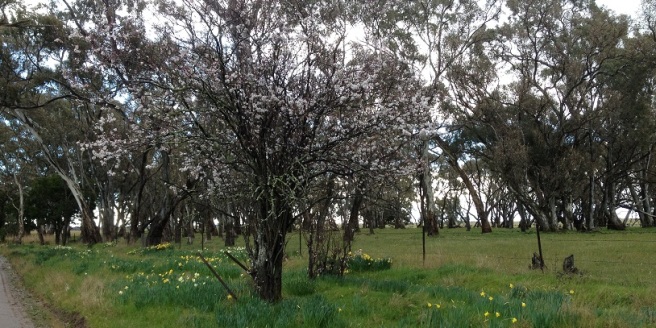 I wander’d lonely as a cloud
That floats on high o’er vales and hills,
When all at once I saw a crowd
A host of golden daffodils,
Beside the lake, beneath the trees,
Fluttering and dancing in the breeze.

Continuous as the stars that shine
And twinkle on the Milky Way,
They stretch’d in never-ending line
Along the margin of the bay;
Ten thousand saw I at a glance,
Tossing their heads in sprightly dance.

The waves beside them danced, but they
Outdid the sparkling waves in glee:
A poet could not but be gay
In such a laughing company!
I gazed — and gazed — but little thought
What wealth the show to me had brought;

For oft, when on my couch I lie
In vacant or in pensive mood,
They flash upon that inward eye
Which is the bliss of solitude;
And then my heart with pleasure fills,
And dances with the daffodils.

Gillean Dunk has been writing about gardens ever since she made her first garden in the late 1960s. Her weekly garden column in the Sun News Pictorial ran for more than ten years and she contributed regularly to several magazines, including  Australian Home Beautiful and Australian  Country Style. Her book, Ferns, published in the 1980s has become a classic. 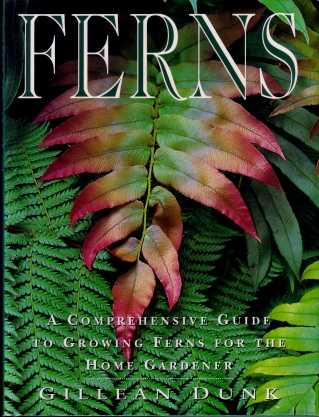